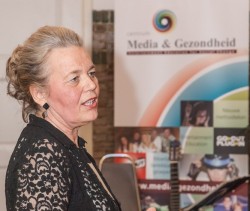 On Thursday December 11th the Center for Media & Health (CMH) celebrated her 15th anniversary together with her collaboration partners and friends.

“The CMH was founded in 1999 and empowers people to live a healthier and more sustainable lifestyle by using entertainment media, storytelling and new communication methods. Over the past 15 years we have been developing innovative social change projects on pressing issues such as sexually responsible behavior, hearing loss prevention, sustainable consumption patterns and social and cultural tolerance. These projects are (inter)nationally known for their unique combination of new technologies, scientific research and effective implementation strategies.” (Martine Bouman)

During the anniversary celebration, the CMH shared highlights of the last 15 years. Karin Bruers, inventor of the Socialsofa and the Socialsalon, told her fascinating story about being a social entrepreneur, whilst music was provided by the flamenco guitarist Alain Labrie and the singer Ester Veldhuis.

“A wonderful anniversary celebration, thanks very much! It was great to hear what you have achieved during the last 15 years!” (collaboration partner)

Watch the clip with felicitations of international partners of the CMH:

Below you find an impression of our 15th anniversary:

Back to news overview